This individual called AGT to share their story. Enjoy!

Let me begin my story by saying that I have always been a skeptic about the existence of ghosts. I felt I was much too practical and levelheaded, now I’m not so sure.

A happy couple moves into their new home

In 1992, excited to begin our new life together, my husband and I moved to Austin. Several months before moving, we visited the city to find the perfect rental. We searched non-stop for two days and finally found our prospective home. It was custom-built with a great view, and unknown to us, contained an unusual history.

We were told, without much detail, that the owner’s wife had died in the home. We met the husband at the final viewing of the house. While showing us around, with a distant gaze, he told us that her death had been unexpected, and he no longer wanted to remain in the house. He went on to say that it had been their dream home and he wasn’t ready to sell. He wanted to find a “nice couple” to rent it for a while. Even after signing contracts, it was never quite clear what had happened, only that she had possibly been murdered. I suppose I shrugged off those thoughts of murder and a “tainted home.” It would be months before we moved in, the death had happened nearly a year before, and it was the perfect place for us.

We had been living in the house about two years and having the time of our lives. Working, traveling, living in and loving Austin. Then one night after a trip to Jamaica, I woke to the eerie sound of my husband moaning a sort of muffled scream in his sleep. I began feeling this overpowering sense of fear weighing upon me. Terrified, I opened my eyes to see what appeared to be a large, dark, shadowy figure standing at the foot of our bed. I held my breath in fear, my heart was pounding. I elbowed and pushed my husband who was now almost beginning to howl. He would not wake, so I closed my eyes and silently commanded the thing to go away. Then all was quiet again. Oddly enough, I must have felt safe again because I turned over and fell asleep.

In the morning, I told my husband about his restlessness and the awful sounds that he had made in his sleep. He told me he’d been having a horrible dream that someone was in our room, standing next to our bedside, and described the intruder as a large dark silhouette of a person. I looked at him in disbelief and told him of my experience during the night while he had been crying out. Together we half-heartedly laughed and thought, “Wow, that’s weird.” I suppose we considered it some strange coincidence and didn’t talk much about it.

About a year later, after another vacation, we were again visited. Only this time, it was by my husband, who was asleep alone in bed. I had been up late writing in my journal when I heard what I thought was the hooting sound of an owl. It became continuous and creepy, and I realized the sound was not coming from outside, but from our bedroom. I walked slowly to the bedroom and found it was my husband making that awful, muffled howling sound. I went in to wake him and he seemed so afraid that I snapped on the light. He said he had had another dream about the dark and shadowy figure in the room. He felt its presence but couldn’t get to me. I touched him reassuringly, saying, “See, there is no one here.” He was a bit shaken, but having the light on seemed to help. Surprisingly enough, we again shrugged it off as merely a dream. (NOTE: Later that year, her family pursued another investigation of the death of the woman who had lived in the house prior to us. The husband was finally found guilty, convicted and sentenced to prison for the murder of his wife. )

Only one other incident remains in my memory as quite odd. In retrospect, it could’ve been a ghost. Yet, I will say again, in all of these experiences I try to give each some tangible, rational meaning. I never once considered a supernatural force, until now.

Arriving home late from work one evening, I walked into my kitchen to catch up on the day’s mail. It was already dark outside, and my husband remained at work for the night. The house was quiet.

Suddenly, out of the corner of my eye something swooshed by and made me jump. I looked down to see my cat running by. That was strange, because my cat had stayed outside since moving to our rental home. I started to scold him for being inside, then I froze. Something was not right. Trembling, I wondered, “How did the cat get in the house?” My mind raced, “Did my husband allow him in since it was cold outside? Was there, is there, an intruder in the house?” With my keys in hand, I ran quietly back toward the bedroom to get our gun. As I went past the steps that lead upstairs, I sensed cold air rushing down. Feeling as though someone must be up there, I ran to the car, got in, locked the doors and sped out of the driveway. At the top of the hill, I called my husband. Breathless, I asked for his advice and had he let the cat in this morning? He said “no” he had not and if I thought there was someone in the house then I should call the police.

Gasping after each word, I described what I thought was an intruder to the police. They said they would be out shortly. Upon inspection, the police said there had been no forced entry, no open windows, only one scared kitty underneath the upstairs bed. My husband and I never could figure out how the cat got into the house. We each suspected the other of letting the cat in while leaving for work. I never did understand the rush of cold air down the steps that frightened me so. Even then we loved the house so much we decided to buy it.

The Living go on

Through the years we have told a few friends our bizarre story. I think we just enjoyed seeing their hair stand on end. Nothing was tangible enough for us to understand, so our lives just went on as usual. Soon, we decided to start a family and put the house up for sale – it seemed impractical for children. Several months went by with no buyers. Until one day, during an open house, a couple came to see the house. The woman claimed to be one of the deceased’s best friends. She told the realtor she remembered her friend building what was to be her dream home and that she could almost feel her there. Shortly after, they signed contracts with us to buy the home.

Even after these strange events, we never gave them much significance until recently. While on a tour of haunted places downtown ( THAT’S US AUSTIN GHOST TOURS), the group was asked if anyone had any ghost-like experiences. Naturally, we were eager to share our spooky story that had so intrigued our friends. We soon found out that our sighting was one of the most commonly seen apparitions. This information piqued my curiosity to find out more about ghosts and haunting. Upon further investigation, I found out that the woman had been murdered in February, approximately the same time that we had returned from our vacations and when these weird events took place. What had visited us, I do not know. What I do know is that these things did happen. Now I have begun to believe that some things you cannot touch or explain do exist. Once a skeptic, now I am not. 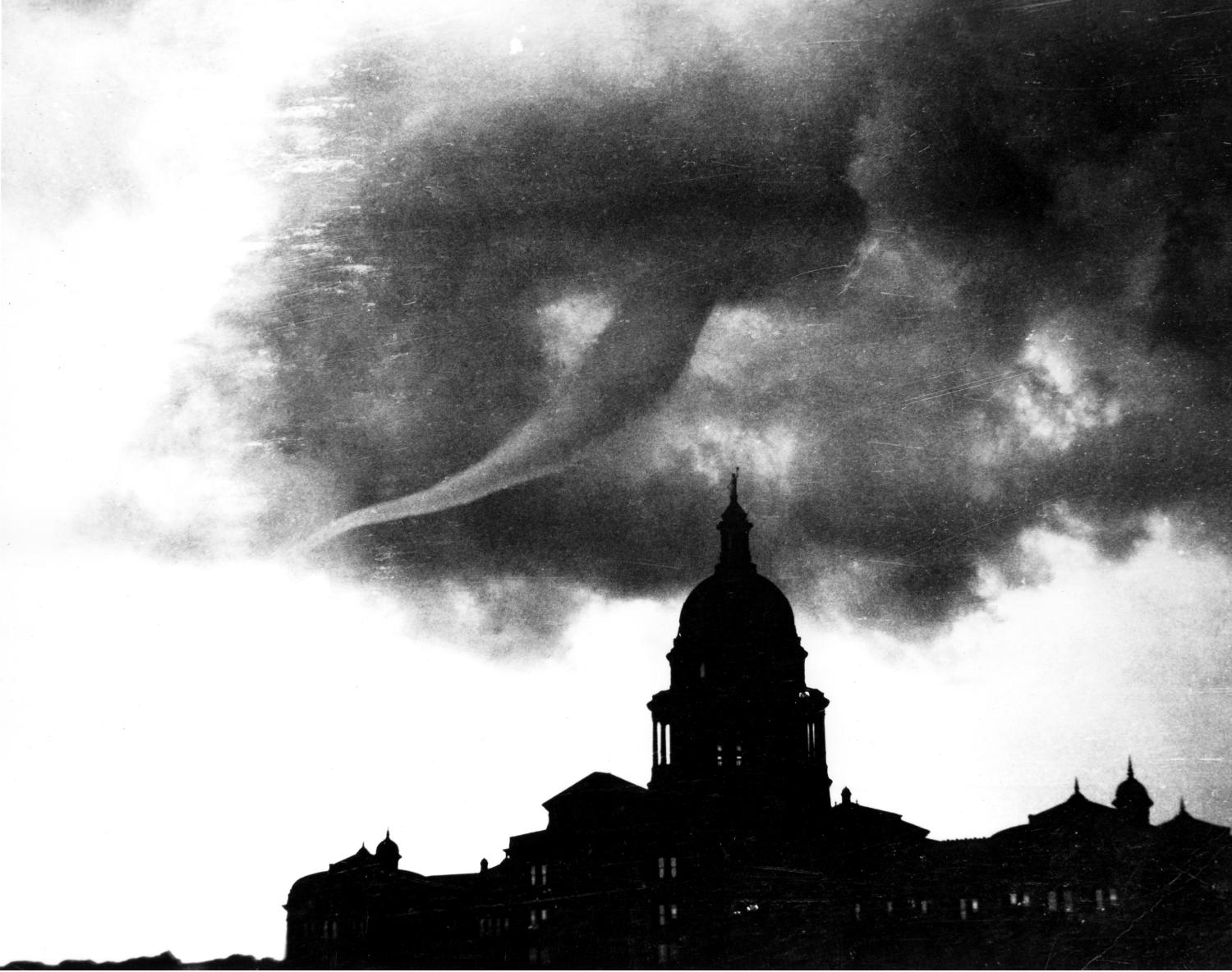 The 1922 tornado that destroyed the Bargsley Homestead – Southwest Austin

A tornado  struck Austin on May 4, 1922. It destroyed the Bargsley family home to the extent that only the fire place foundation remained. All 6 people in the Bargsley... The 4th of July in Austin Way Back When

There once was a magazine that was publish by the Austin History Center called ” Waterloo Scrap Book.” It is up to you to find out why it was call...