The Ghost of Nathan Rhambo

Although not as old as Moonshines, which was built in the mid 1850’s, this building is still quite historic. You can see the original white-washed rubble stone dating back to 1874, but this section has a newer brick face – and oh, my God – The WINDOWS ARE BRICKED UP! It’s okay – when we get to that part of the story, you’ll learn it was quite the practical measure and not sinister at all.

The building was built by Italian immigrant, Michael Paggi who was either a Renaissance Man or he had A-D-D.

As soon as he got a business established for himself, something else would grab his attention and he’d be off and running, doing something else.

He became fascinated by all things mechanical, so he taught himself to be a blacksmith, build this building and turned it into a carriage-building company. Then he opened up a carriage dealership right around the corner on 6th St. where the Dueling Piano Bar stands today.

Well, when Michael passed and the next generations of Paggi’s inherited the buildings, by now it was the early 1900’s. Carriages were replaced by HORSELESS carriages, and descendants weren’t interested in carrying on the family business, so the building went empty – until it was bought around 1912 by a very eccentric gent by the name of Nathan Rhambo.

Mr. Rhambo was eccentric for a few different reasons.

First of all, he paid for the building in cash. No banks or lawyers involved.

Secondly, Mr. Rhambo loved to dress all in white: whit hat, coat, pants and shoes. He had a snow white horse and a snow white wagon. What made this unusual was that Mr. Rhambo was an undertaker. They usually dressed all in black, and had a black hearse or death wagon.

The third thing that set Mr. Rhambo apart was, despite the fact that he had enough ready cash to buy the entire building, he was a man of color. He was a prosperous African American.

Mr. Rhambo was also witty, intelligent, engaging, a sparkling conversationalist – and a bit of a flirt. And he was readily accepted into West Austin white society. You were a savvy hostess if you had Nathan Rhambo at your little suarre’. And he doted on all the attention.

Another group that dearly loved Mr. Rhambo were the poorer blacks in East Austin because he took on a lot of business at no charge or a reduced rate.

So, dearly loved by the poorer blacks…readily accepted by the rich whites. But there were a lot of folks in the middle there who did not care for Nathan Rhambo. They thought he was “uppity.’ This gentleman did not know his place!

Well, things came to a head in August of 1932 – the height of the Jim Crow era – when there was a knock on this door late that night. A young black gent doffed his Panama skimmer hat and apologized for the lateness of the hour but said, “Sir, your services are needed to the north of town by Walnut Creek. I’ll be glad to ride with you and show you the way.”

But it was outside Corsicana, Texas – about 130 miles from Austin – where Nathan Rhambo’s badly-beaten, bullet-ridden body was found. The young man who had lured him to his death was found, tried and executed, but there was always a lingering suspicion that this guy was taking the fall for someone else. You see, Rhambo wasn’t exactly a saint. He ran a funeral home and a burial insurance company, while also running a gambling operation on the East side. Meanwhile, his brother Perry C. Rhambo was one of the East side’s biggest landowners, and he operated the neighborhood’s most successful barbershop in addition to several bordellos.  Perry had been a porter at the Stephen F. Austin Hotel in the early 1920s, where he also was a pimp to the white clientele, until he bought a house in East Austin and opened his first brothel.

No matter WHY someone killed Nathan Rhambo, his building was now empty. It changed hands a few times as the 20th century progressed – until it was bought in the early 1990’s by David Grimes, local photographer. It was Grimes who brought the building up to code structurally and electrically. It was he who bricked up the windows. He was a photographer, and he didn’t want any light leaks, so you see, it was quite the practical measure.

But almost immediately after work began on the building, odd things began to happen. Tools were moved around or disappaearing. The electricians were calling up Mr. Grimes and asking, “Why are you ripping out things we installed the day before?” Naturally, David’s response was, “Why if I’m paying you what I am would I DO a stupid thing like that?” Eventually, the building was ready, and Mr. Grimes moved his business in. And weird things continued.

Like the time he was first to arrive, unlocked the door and found a remote-control racecar waiting for him. This was a car that he used for children’s portraits. If they were on the restless side, he could send it zipping across the concrete floor to delight them. He picked the car up and put it on the high shelf in the studio where it  was stored, and went to his office to begin the day’s appointments – when the car came zipping around the corner again. It seemed to have favorites among customers and assistants, doing very intricate maneuvers, really weirding people out. SO they took the batteries out of the car and the controller. This did not stop the car from moving around on its own. Until one day, it stopped moving. Mr. Grimes said it was like losing an old friend. But that’s okay. Other weirdness went one.

Like the hot August afternoon, he took a thick pint glass from the cupboard and filled it with ordinary tap water. The phone rang, and he was staring absent-mindedly at the glass, when he noticed it was being split in two – a curving, artful cut – until either side fell, spilling water all over the counter and the floor.

Finally, curiosity getting the best of Mr. Grimes, he invited a psychic to tour his building. When they arrived back in the downstairs studio, she said, “Yeah, you’ve got yourself an interesting building here alright. For one thing, there’s a black man in that corner over there, dressed all in white – and he’s laughing.”  So, Grimes had to ask…”What’s so funny?” The psychic replied, “He’s saying he never thought he’d be his own customer. Does that make any sense to you/”  And of course, knowing Mr. Rhambo’s occupation as an undertaker, it made perfect sense to David Grimes.

Nathan Rhambo…still occupying 500 East 5th Street, and apparently quite amused by the afterlife.

May the same be said for all of us. 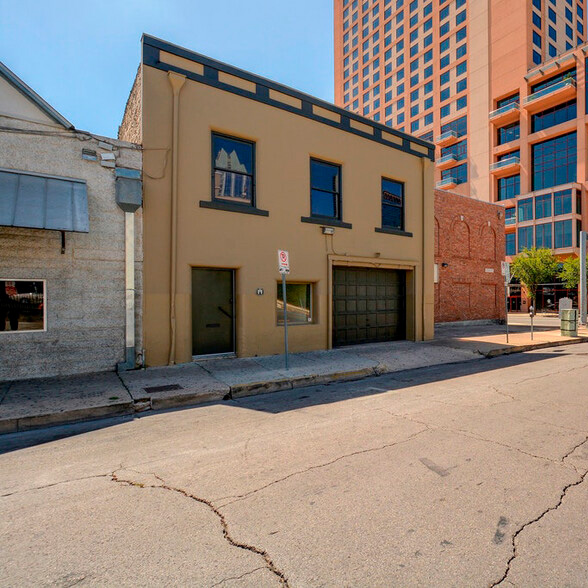 Within the abandoned buildings, discover the history of Bartlett as told through the ghosts who have remained to tell their stories.

3-hour paranormal investigation. The downtown buildings remain today much as they were when built from the 1880's - 1930's. Explore the old Gershbach- Wacker Department Store, abandoned bank, Taylor shop and more during this downtown exploration. 512-203-5561 for more information.