Pioneer times were an era in America’s past when individuals and families left what was familiar and ventured forth into barely tamed lands in anticipation of a better life.  These enterprising people arrived from settled areas in the United States and scattered countries with a large percentage migrating from European soil.

Swen Bergman left his home in Ekjo, Sweden alone in 1852, at age 16.  Months later he disembarked at Galveston harbor wandering onto a new continent swarming with people with big dreams and high hopes, just like his. Swen took in his new surroundings. Though the Galveston Harbor was an active port with sailing ships from all over the world, the scene that slowly unfolded as the ship drew close to the dock was nothing like what Swen had anticipated.  How could he have known what to expect?   Texas was still a wild state compared to the port of Amsterdam where he had embarked on his trip across the Atlantic and then south to the Gulf of Mexico. Swen’s true name, Bergman, would be lost forever once he arrived in Texas.  Immigration officials misspelled his ancestral name and documented Swen’s name on his citizenship papers as Beryman.

Now, as a new Texan filled with perseverance, energy and faith. Swen worked as much as he could, doing whatever he could to earn a dollar.  He took to the saddle as a cow puncher, labored as a farm hand, became a blacksmith’s apprentice and even drove a freight wagon to and from small towns along state highways that were little more than wagon ruts between sagebrush.  During this time he saved his hard-earned wages, and when he had accumulated enough money purchased cattle, horses and land.

Following ten years of hard work, at the age of 26, Swen began correspondence with a Swedish girl in New York City.  Though Johanna Anderson’s job as a housemaid took much of her time, she always found a way to write long thoughtful letters to Swen in far away Texas.

The Civil War erupted.  In spite of the hostile and desperate condition of the country, Johanna was able to travel by stagecoach from Union territory onto Southern soil in 1863.  The couple married and settled forty miles west of Austin outside of Johnson City on a small parcel of land Swen had purchased.

Like many new European immigrants, Swen and Johanna favored the Union.  Living in a Southern state, their stanch support of Yankees made peaceful co-existence among their neighbors difficult.  Nonetheless, they made it through the war and reconstruction era and their little farm thrived until the winter of 1878 when tragedy struck.

One brisk mid-November day Swen Beryman and three comrades were riding along the base of the awesome Devil’s Backbone, headed in the direction of the eerie double peaks known then as Long Man Mountain and Long Woman Mountain rising fourteen hundred feet above the Texas plain.  At that time evidence of ancient Indian shrines was still visible on the zenith of each mountain.

The remains of Native Americans who inhabited the land long before the Texans were plentiful throughout the Hill Country. There was much superstition and some fear among the settlers who found themselves in the area of these sacred Indian sites and shrines littered throughout the countryside.  No area in the Hill Country generated as much superstition, though, as the row of rolling hills known today as Devil’s Backbone. This spiritual core of Native American worship is where Swen and his companions found themselves that fateful day.

As late afternoon approached, the group experienced an uncommon natural phenomenon.  The sky turned black and the temperature began to drop rapidly just as the trail leading up to the top of Long Woman Mountain came into sight.  Lightning flashed and hail pelted them as a storm settled above the small group of men.  At the base of the impressive incline the horses began to spook and all but Swen became frightened.  The men were already in a state of anxiety, unnerved by the unexplainable events told by those who dared to traverse the once sacred hill.  As they insisted on turning back, Swen laughed at their irrational fear and continued on.  Ascending the sloping trail alone, thunder began to crash, the wind bit into his skin, and the temperature continued to plummet.  Swen was forced to dismount and find shelter among the rocks and thicket, huddling there all night.

Concerned because Swen had not returned to their campsite as the sun crested the horizon the next morning, his friends found the courage to climb the hill and look for him. They found him tucked in his meager shelter, but not soon enough.  The temperature on the hill had dropped so low that frostbite had set in and Swen’s lower appendages were frozen.   By the time they had transported him to the local doctor, it was too late. The doctor had no choice but to saw off the damaged legs to prevent gangrene from claiming Swen’s life.

Swen survived the double amputation at a time when many men did not, and later he worked in two artificial wooden legs.  Although his wooden legs allowed him to walk, he could not keep up with the responsibilities a ranch required.  He sold the ranch and moved his wife and children to Oatmanville where he purchased a general store; a store that still stands today as the Austin Pizza Garden.

Swen Beryman managed the store and the local folks he dealt with unanimously agreed that he was a fair man.  He was also ready and willing to protect his property at any cost.  He demonstrated that resolve in 1880 when confronting a desperado.

Brack Hendericks made a stop at Swen’s to pick up the tobacco he would need while hiding out in the hills west of the city.  On the run and in an aggravated mood, Hendricks barged into the little store as Swen was scrubbing the counters and he took the liberty of helping himself to the smoke and chew in the glass display case.  Brack didn’t believe the immigrant with no legs was any match for him.  As the outlaw hastily grabbed tobacco and stuffed as much as he could into his pockets, the outraged Swen demanded that he stop.

Ignoring Swen, Hendricks looked around the mercantile to see if there was anything else he might need while on the lam.  Before Brack knew what was happening. A quick-thinking Swen threw a can of scouring powder into the thief’s eyes. Swen then proceeded to hop onto the counter, reach over and pull Brack’s gun from its holster.  After taking out the bullets, he turned the gun around and hit Hendricks in the forehead.  Stunned and blinded from the powder, Brack began choking on the chew he had stuffed in his mouth, and fell unconscious onto the floor just as a Texas Ranger and Sheriff’s Deputy came through the door. They had seen the brand on the horse tied to the hitching post in front of the store and recognized it as the one stolen by the man they were tracking.  They thanked Swen for slowing the criminal down and offered him the reward money for his capture.   Swen refused the reward money. He did, though, take his tobacco back.

Swen’s general store still sees a brisk business today as the Austin Pizza Garden. The old stone structure stands out amid the more modern shopping plazas, and accompanying the steady flow of customers, there are the consistent reports of odd occurrences.

There was the time when the owner was the last to leave Austin Pizza Garden for the night. He had prepared a pizza to take home to his family beforehand. Just before locking up the restaurant, he took the pizza out of the oven and sliced it. Stepping away for a few moments to retrieve a box, he was astonished to find upon returning that the pizza was once again whole and uncut, crust, toppings and all – even though the roller with remnants of steaming toppings was still in his hand.

Occupants of the party room upstairs often hear the sound of footsteps walking past even when everyone is seated. Sometimes when the restaurant is quiet, near or past closing time, the footfalls can be heard from downstairs, although the staff knows the party room to be empty.

An old woman was often seen on the second story, particularly near the stairwell. She would scowl at staff members as though they were intruding, and then disappear. Interestingly, an elderly woman who had lived in the building before it became Austin Pizza Garden at 6266 W. Highway 290 in Oak Hill, once stopped by and asked to look around her old residence. When she led staffers upstairs to the front room on the second floor, she reported, “Oh, and here is where I used to see that mean old ghost woman!”

It is believed that one of the spirits lingering in the Old Stone Storehouse is that of the indomitable Swen Beryman.

The Phantom Fiddler of Pioneer Farms

In October of 2020, as the world was first feeling somewhat comfortable emerging back into a post-pandemic existence, Austin Ghost Tours was invited to be part of a paranormal Q&A... 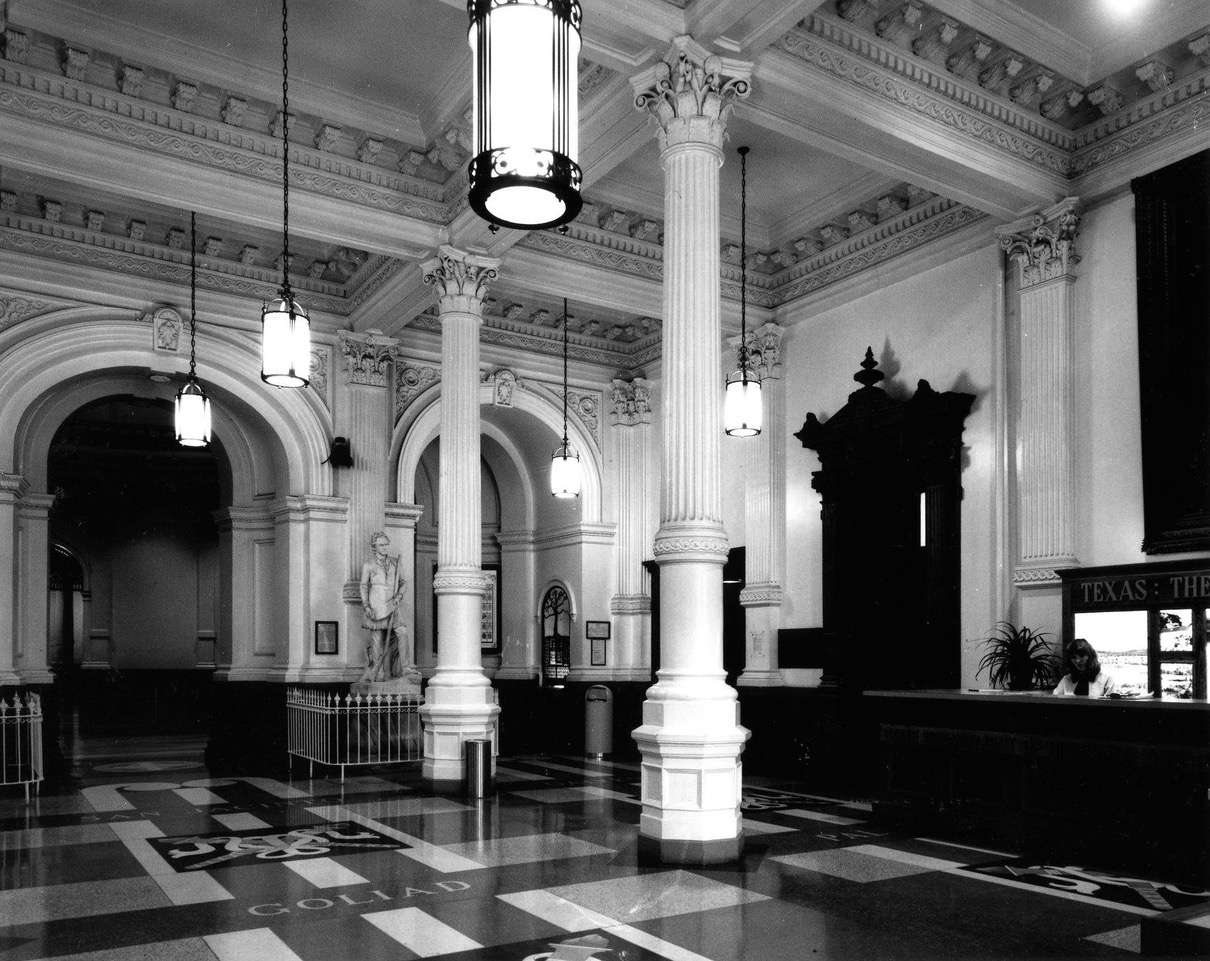 In this photo from the 1980’s, the Texas Travel Center used to be situated in the foyer of the Texas State Capitol. The young woman to the right, behind the...