The home was opened “to all wives and widows of honorably discharged Confederate soldiers who either entered the Confederate service from Texas or came to live in Texas prior to 1890. Women who could prove that they actively participated in the Confederate War effort were also eligible for care in the home. All residents of the institution were required to be 60 years of age or older, without means of support, and physically unable to make a living.

In the Texas State Archives there are a scant 27 boxes and a total of 363 files that represent women who once lived and died at the Home. Since the building housed at least 3,000 women, it is evident that quite a few files have been lost over time. It was not unusual for the boxes have been kept in private homes, but after being given to the state many were destroyed due to lack of space.

Most files had only basic information about each woman, excluding a precious few of the files which contained correspondence between the superintendent and family members, allowing a glimpse of what life was really like in the Home. Standard information, however, included only her name, date of birth and death, what to do with her belongings following her death, and where she desired to be buried. Some are buried next to their husbands in the Texas State Cemetery.

Many of the women who entered, lived and died at the Confederate Women’s Home were childless. Some were so advanced in age that they did not know where they were. Many were brought by families that did not have the financial means for the increase in medical care. At the Home, doctors and nurses were on call 24-hours a day. Octogenarian studies indicate that when an older person who has spent much of their years at a certain location experiences a major change late in life, such as being admitted to an old folk’s home, it hastens their demise.

Actually, the Confederate Women’s Home was much like a nursing home today. Every level of contentedness and disgruntled feelings could be observed. Some lived at the Home for 30 years while others only a few days or hours. As Superintendent Miss Katie Daffan once wrote,

“Some little old ladies thought the Home was heaven. Some did not like the food or the way it was cooked or the clothes they were given. Some had their husband visit (usually these men resided at the Confederate Men’s Home). The residents quilted and tatted, or knitted, or crocheted, or did just plain sewing. Volunteers were frequently in the Home and the ladies attended church in the front parlor. However, not all the ladies who lived there were that lively. Some were in need of constant care or were cranky and demanding”

In 1912 the State took control of the building and in 1916, due to the steady increase of needy women, an annex was added increasing the number of beds available, That was followed by a full service hospital called the Fannie Mae Memorial Hospital after the mother of J.E. Ferguson, Governor of Texas at the time. The Confederate Women’s Home could now house 80 to 100 women at a time.

Still, by the early 1920’s overcrowding was a problem at the hospital and the new applicants were ill and bedridden. Another hospital and morgue were added in 1924. By the 1930’s admissions began to slow down and most of the women were either confined to a bed, or in need of constant care.

The Board of Texas Hospitals and Special Schools was in charge of the Confederate Women’s Home after 1949 at which time it received little attention as it was a declining institution at a time when the Board was experiencing an increased need for services at other hospitals, most importantly the Texas State Hospital.

During this time most of the women were in ill health, and senility was a factor for many. The building fell into disrepair and the Fannie Mae Hospital was the only building that remained opened. In 1963 the last three remaining women were moved to private nursing homes and most of the building was abandoned until it found new purpose for a different generation.

Before the rubella or German measles vaccine was created in 1969, a rubella epidemic swept across the United States in the early ‘60’s. Many of the pregnant women who contracted the illness miscarried, but approximately 20,000 did not and they gave birth to children with severe deformities including deafness, blindness, heart defects, mental retardation and other disabilities.

In 1972 the Texas State School for the Blind opened the newly renovated Confederate Women’s Home as a learning facility for their students affected by the rubella epidemic. The Fanny Mae Memorial Hospital was torn down and a new brick building was constructed and the original Home and annex were converted into classrooms, a gymnasium and an area for physical therapy. What used to be rooms for the aging ladies became rooms for the children.

The multi-handicapped children lived in the building learning basic life skills such as using a toilet, feeding themselves, as well as basic education and physical therapy.

Ten years later the children were returned to the main campus at the Texas School for the Blind and the Confederate Women’s Home was sold. The profit from the sale was used to build a permanent facility for their rubella students.

In 1986 the building’s purpose once again centered on senior citizens, becoming home to the Austin Groups for the Elderly (AGE), a partnership of different organizations that offer services to the elderly.  It is uncertain why the ghost stories began then, but they came pouring forth!

One A.G.E. employee reported, “I saw an old woman in a white suit with white gloves and hat, walking out of a storage closet in the Elder Haven Adult Activity center. I followed her to see where she went. The woman entered the break room where several people were seated. Just as I entered the room, the woman I was following vanished, but one lady seated in there exclaimed that she was suddenly very cold and felt like some one was watching her. I told her I had just seen a ghost walk in.”

Tammy, another A.G.E. staffer gave this account: “I was working late one night in my office on the second floor when I heard what sounded like a bunch of women talking and laughing outside my door. I walked out several times and as soon as I opened my door the talking stopped, but once I closed the door and returned back to my desk the talking and laughing would start up again.”

There is this story from A.G.E. employee Sandy: “Late last year, we kept noticing that the Xerox machine was getting turned off early. We asked around the staff and each of them said, ‘No, it’s not me.’ I thought it might be some pre-programmed time within the machine, so I asked the technician when he was out one day, and he told me that there wasn’t a timer switch on that machine.” Sandy described the phenomena. “The machine would be on, and then the next minute the switch would be in the off position. One afternoon I was in a hurry, and I literally turned around briefly to do some sorting when I heard a ‘click.’ Sure enough, the machine had been turned off, except there wasn’t anybody else there!”

There is a small two story structure behind the main A.G.E. building, constructed in the 1930’s. For a while a nearby school rented it for their football team. A member of the team told this story: “We would often come back to our building after a night game in order to change. There would be a dozen or so of us all hanging out upstairs making noise and watching highlights of the game on the television. Every so often, no matter how loud we were, we would hear an even louder banging as if someone was stomping up the staircase that led to the second floor. Often we would turn off the television and sit quietly as the banging continued. As soon as one of us would make the move to walk over to the stairway and look down, the banging would stop.”

An A.G.E employee who did not wish to be identified admitted, “I was working on a Sunday. To my knowledge the rest of the building was empty. There had been some tenets in and out earlier, but I hadn’t heard anyone for some time. I stepped outside to get some fresh air and take a break, and then I went back in.  As usual on the weekends, the hall lights were dimmed with only every other fixture on. As I approached my office door, I stopped, startled, because I could hear a child screaming in pain or fear…mostly terror, I think. The sound was very faint, like something just out of reach, and I couldn’t tell which direction it was coming from. It was almost like it was part of the air itself or in the walls. At the time I didn’t know that the A.G.E building was once a home for disabled children. The sound faded and I never heard it again. The whole experience, though, was unnerving.”

As though to strengthen the case of haunting by a child or children, A.G.E. employee Celia told us, “I had left my office one day and was pulling away in my car when my passenger side window started to roll up and down on its own accord. It was an electric window and I had never had any problems with it before.  I kept trying to keep the window rolled up but after a few minutes it would roll back down on its own and then up, as if a child were playing with it or someone who had never seen an electric window before. This went on for several weeks, and I took the car from mechanic to mechanic, none of whom had an answer. The problem began to escalate when my door began locking and unlocking. I thought that maybe I had picked up a passenger from the building, so I turned around and went back to the office. I parked the car and told whoever might be in there that they could not come home with me and that they had to return back to A.G.E.  I then walked back to my office hoping that I was being followed. I waited a few minutes and returned to my car. I had no further problems with the windows or door locks after that.”

For a period of time there was a childrens daycare in the A.G.E. Building. Every evening the staff would pick up all the toys and put them in their proper storage area. In the morning, though, it was not uncommon to find toys scattered up and down the hallways. Were the playful spirits those of once-disabled children?

It should also be noted that while conducting an investigation of the Confederate Women’s Home, my team not only recorded disembodied adult voices, but also whispers and chimes.

The Austin Groups for the Elderly: https://ageofcentraltx.org/ 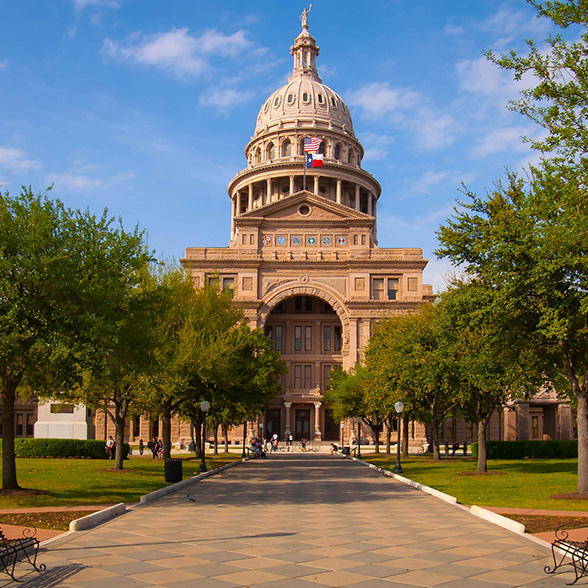 Guests in the East Wing

Finger Prints on Capitol Window  The Lt. Governor’s apartment consists of 3 bedrooms, a dining room, small kitchen, and a den. In 1983 on the second floor, in the east...

The most haunted location in Austin. The Confederate Women’s Home  Researched and written by Jeanine Plumer Battlefields, cemeteries and hospitals, as well as areas where such places once stood, are...