Concern about holding back the Lower Colorado

Written and reasearched by Jeanine Plumer 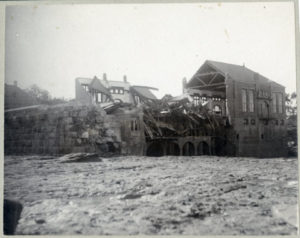 From the onset, the swollen motionless clouds that had settled over Austin and the Lower Colorado were ominous. Massive storms had been moving through the Central Texas region since Friday, April 6, 1900.  In some areas as much as 17 inches of rain had fallen in only two days.  Water poured from creeks and tributaries into the Lower Colorado causing her waters to rage as they swelled the shore limits of Austin’s popular retreat Lake McDonald and sent a steady current over the wall of the Great Granite Dam.

The dam was a source of great pride for the city, gracing the cover of Scientific American magazine. In 1890, bonds were sold to cities in the east and $1 million was raised for the construction of a dam and $600,000 for a power plant.  The dam was completed in 1893, and the waters it held back formed Lake McDonald. But despite its praise as an engineering marvel, not everyone agreed.

The torrential downpour began in earnest late Friday afternoon, April 6th and continued.  “All night long the rain fell in solid sheets,” reported the Daily Tribune. City residents knew to stay away from low water crossings and infrequently traveled dirt roads.  Once the rain commenced, mobility in and around the city was quickly limited to foot traffic or horseback.  Scheduled meetings such as the Cigar Makers Union, the Austin Garten Verwin, Pashahona Tribe #19, and the ancient Order of Hibernians were forced to postpone.

Finally, on Saturday morning, April 7th, the rain stopped and with the dawn only a few clouds and light drizzle remained.   By mid-morning, the sun had begun to shine and some Austinites ventured out to work or play. Some chose to make the trip along Dam Avenue, two miles west of downtown.

Word had spread rapidly through the city that the raging water around the dam was a sight to behold.  The water had risen eleven feet above the dam’s summit and was cascading down in a wild torrent.  Anxious to see the impressive sight, no one questioned the stability of the 60-foot high, 1,150 foot long and 60-foot thick concrete and granite structure.

At 11:15 AM, a shock rumbled like a smothered explosion, echoing for miles throughout the Hill Country as the dam split down the middle and the east side crumbled under the water’s pressure, washing away. Below the dam, a 50-foot wall of water descended as the 30-mile long and one-mile wide Lake McDonald emptied into the already swollen Colorado.

Read more about severe weather in Texas in 1900, click here.

I have to admit. I enjoy looking at the sky and watching for falling stars  and mysterious lights. I have not been disappointed on many occasions. At the time it...

Well, some people have to see or “experience” it to belive “IT.” Such is the case for Elon Musk. Read more about it from Grace Kay at Insider magazine: click...