Austinite Neal Begley described, “I saw the water spread out and everything seemed to go down at once.”

As the dam began to shatter, Henry Robell was quick enough of mind and limb to move faster than the swirling wave.  Upon witnessing the first movement of the shifting massive structure, he did not wait to see what would happen, but raced on horseback at breakneck speed along the Colorado’s northern bank into the city, warning people and saving lives as he shouted, “ The dam has broke! Run to high ground!”

The president of the Austin Telegraph Company, O.D. Parker, within minutes of hearing Robell’s warning, quickly mounted his horse and rode to his office on Congress Avenue where he frantically telegraphed to the towns scattered downstream of Austin,  “Dam has broke!” Those within earshot of the warning scattered. Some people rushed to save what they could from their homes. Others galloped on horseback along the riverbanks, warning neighbors. Many of the rural people living on or close to the river’s shore could not be reached in time. The number of lives lost cannot be accurately determined.

“Men, women and children were screaming and crying and people were running as if mad in all directions,” one man would later describe.

A Reporter on the scene

A reporter watched as the water swept seven houses downstream. The passenger depot at Third Street and Congress Avenue was engulfed.  The lumberyard that stretched from the river’s north shore beyond Second Street incurred total destruction, as did the Austin Ice Company at Congress and 1st Street. The Metz Brothers, Albert Schneider’s and Otto Schulenburg’s saloons on the east side of the city in the German district were also destroyed. Water pushed up Congress Avenue flooding the first floor of businesses as far north as Ninth Street.   People camped along the shores were carried away, joining the houses, cows, dogs, farm equipment and other victims caught in the rushing waters.   The river continued to rise 17 inches an hour until 3:00 that afternoon.

Witnesses cheered as a man climbed a telephone pole just before the wildly swirling water reached him.  The cheers faded into horrified gasps when he was suddenly struck by a house caught in the deadly current.

The Austin Daily Statesman reported, “Austin resembled a bed of red ants suddenly disturbed.  Men and women run hither and thither in the wildest alarm.  Carriages, buggies, horsemen, and cripples were rushing down toward the river and every newcomer had a fresh tale of horror to tell.”

Shoal Creek and Waller Creek rose twenty feet in two hours. The homes and businesses of the African American and German communities scattered along the shores of Waller Creek and the predominately Anglo homes lining Shoal Creek were consumed with water.

Alerted, some families were able to gather their children and, in some cases, their livestock before their homes were destroyed.  Other families escaped onto the roof where they remained stranded until after nightfall when volunteer rescue teams in boats carried them to solid ground.   Some, like the Italian family whose house was just below the dam, never had a chance.  They were never seen again.

At the site of the dam, 500 people had lined up along the limestone walls and shores to watch the enormous amount of water that Saturday morning.  Other thrill seekers were standing below the dam, witnessing the awesome sight from that imposing vantage point.   When the granite wall gave way thunderously and the massive structure began to crumble, some spectators gathered below were able to move quickly enough, avoiding the deluge by climbing trees and the sloping hillsides.   Others were swept away in seconds.

The Austin Daily Tribune somberly reported, “Five young men were taking Kodak pictures below the dam when the break occurred and all were drowned.  Their names could not be learned.” It was reported that “a woman and two children were seen floating down the river a short distance below the dam. The woman was said to be wearing a red dress. Still another young mother was unable to move her four children to safety in time and they found themselves in the rushing water’s path.  In Austin their bodies were seen floating down the Colorado River.”

In the hydroelectric plant just below the dam, six men and three boys were working in the bottom of the powerhouse, pumping out leaking water.  All drowned but one man who was able to throw his belt buckle over a piece of metal protruding from the ceiling, pulling himself above the water. Two of the boys were brothers, found by the Austin Fire Department, trapped beneath one of the generators.  They were still embracing as they had been when water filled their lungs.

When the water subsided, onlookers peering into the powerhouse were able to see the bodies of the remaining workers swirling, trapped in a whirlpool.   The water was still too high and the current too strong to attempt a rescue.  The next day, family members watched as dynamite was set against the outer wall and a hole was blasted, allowing the bodies to escape.

The dawning of Sunday morning, April 8, 1900 would find hundreds of homeless people camped on the hills surrounding the city.  Those with homes opened theirs doors and welcomed as many as they could.  Women cooked all day to feed those left with only the clothing on their backs.  The men spent all night and the next day running boats up and down the canals rescuing those that had been strong enough and secure enough to wait precariously above the waters.  Texans living in outlying towns and homesteads loaded their wagons and brought all the food and supplies they could afford.

In addition to the immediate problems of shelter and food, there were other potential calamities, such as cholera, malaria and typhoid fever. The water treatment plant was flooded by fifteen feet of water. All of the city’s drinking water was contaminated. Officials began making public speeches and walking from door to door, warning Austinites not to use old or stagnant water or to drink from wells that had previously been in disuse. Fortunately in 1900, some artesian springs still flowed freely in the city and long queues quickly formed. Fear of fire was also in the forefront of the minds of city leaders. The neighboring cities of Houston and San Antonio responded within 24 hours and sent five fire trucks on the railroad. 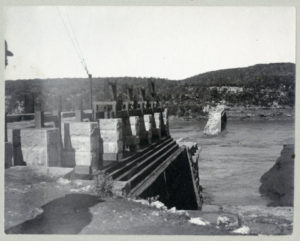 Stories of tragedy and greatness arose in the days that followed as the city pulled itself together. The dead were buried, homes rebuilt. Once again, the customary sunshine beat down on the whitewashed boards and limestone buildings. The breeze from the flowing river stirred the dust along the unpaved roads.  But the wall of water would not soon be forgotten. Residents continued to walk, or ride along Dam Avenue. They went to look, to remember, to imagine. They could see the great pieces of concrete that had been tossed like pebbles and scattered below what remained of the dam.  Clearly visible was the shell of the building that once held Austin’s powerful generator, providing water, electricity and transportation for a city of more than 30,000.  A placid retreat for boating and picnics, Lake McDonald was the first artificial reservoir in the state. It spread a mile wide from shore to shore, and was a place where many residents had summer homes. Lake McDonald was now gone. 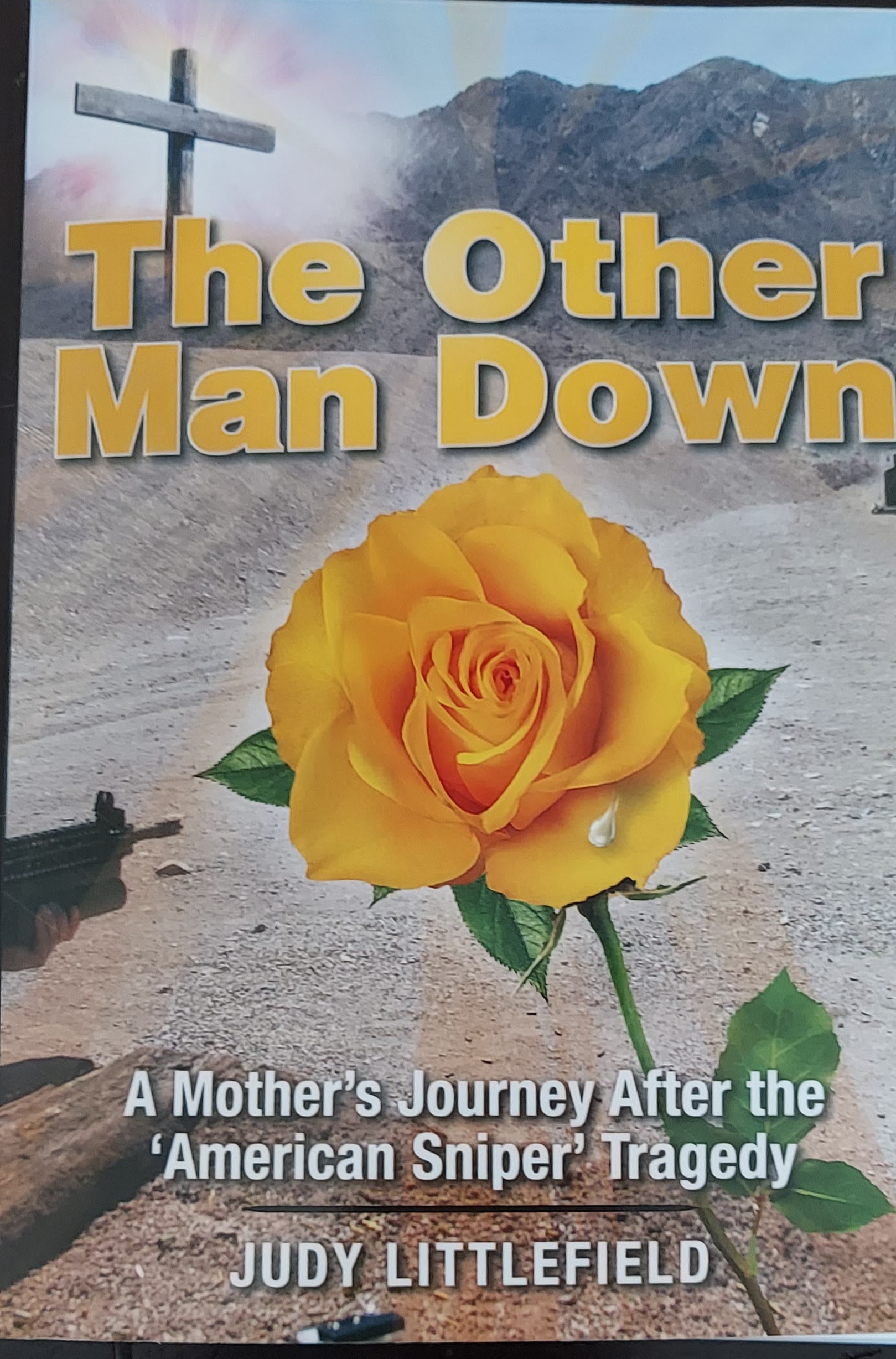 The Other Man Down – Remembering Chad Littlefield

Starting a podcast A few years ago I started a podcast called Haunted Texas and Beyond with Stephanie Mueller and RenegadeRadio.net. In the “ghost” genre it is not uncommon to...

Conversation with Jeanine about all things ghostly in Austin. Interview by, host Julie Rysenga with KOOp radio